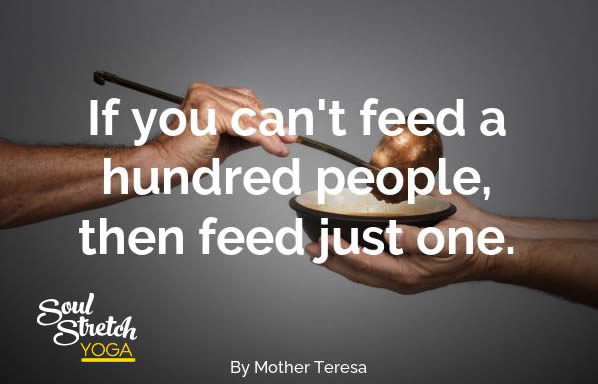 In late August, I attended a sunrise yoga class with Alyssa, an instructor at the Catawba studio. She spoke about how we “rise by lifting others,” and how J.K. Rowling, creator of the wildly successful Harry Potter franchise, was the first person to fall off the Forbes 500 billionaire list because she gives away huge amounts of money to charities.

Before Harry Potter took the world by storm, Rowling experienced tough times. She has never forgotten the terrifying days when she struggled as a single mom, saying that hitting rock bottom (Harry Potter was rejected a dozen times by publishers!) formed the foundation of her life.

In 2009, Rowling founded an international non-profit organization, Lumos, which provides help to families trying to keep mentally ill children at home. Lumos comes from a spell Rowling created in a Potter book to bring light to dark and frightening places.

“You have a moral responsibility when you’ve been given far more than you need to do wise things with it and give intelligently,” Rowling said. Now there’s a lady who has learned how to rise by lifting others! It's Karma, a foundational principle in yoga.

Karma has many meanings. In Sanskrit, Karma means action, in the sense that, like Newton’s law, every action has an equal and opposite reaction. What we think, speak or do manifests into a force with a resultant reaction. What goes around, comes around!

But to yogis, Karma is spiritual, not physical, and when our work is done well is it a form of prayer. Many yogis only practice physical yoga, known as Hatha yoga (and sub-branches vinyasa, kundalini, Iyengar, ashtanga and Bikram). But there are six other yoga practices that reach beyond physical poses: Raja (yoga of the mind); Jnana Yoga (self-inquiry); Bhakti Yoga (devotion to God); Mantra Yoga (universal vibrations such as Om); and Tantra Yoga (energy of the masculine/feminine).

The sixth, and my favorite, is Karma Yoga, the yoga of positive action. It is the selfless giving of your time, kindness and resources without expecting praise or reward. It is meant to be the manifestation of rising by lifting others.

Because we human beings like to fill our egos as well as our souls, Karma Yoga can be hard to put into practice. We want to be recognized, to be seen as generous and caring by others. We want to puff up our chests and revel in the thanks poured on us for our good deeds.

Praise is important to us because we are taught from a young age that winning, getting the prize, is important. I call this Worshipping at the Altar of Self.

Like Rowling, I speak from experience. From my mid-20s to mid-40s, I worshiped at my own personally constructed Alter of Self. And because I didn’t walk with a higher power then, my Altar lacked gratitude or abundance or safety. It was all about me, my preservation, my reward.

Once I came to yoga, I slowly started to dismantle my Altar to Self. I became quiet enough to listen to my own soul’s voice, and I connected to a higher power, God, who is my beacon of Divine Light and led me to my higher purpose. To my Karma.

Karma is paying it forward. To share, to give, to be compassionate and generous. One of the mantras of AA that I learned from my husband, Doug, is that you have to give it away to keep it. Very yogic. For Doug, it meant being a sponsor to others, a guide to those newly recovering from addiction. Sponsors are sort of AA gurus; they guide others traveling the same road, offering support and encouragement and the gift of friendship.
I love that Doug has AA as his Karmic path. And although I have a supportive role in AA, it’s really Doug’s thing. Yoga, once I came to the mat, is my thing. My Karma. My way to help others rise by lifting them up.

In the first three years of Soul Stretch’s existence, we’ve had a dozen or more fundraisers that raised thousands of dollars for organizations as diverse as Suicide Awareness, Hunger, mammograms for women…and so many more. I love that Soul Stretch teachers and students have such an amazing platform for helping others.

For me, giving back now comes as naturally as breath. It’s my passion as well as my practice. But I’ve talked to many people who feel if they can’t impact a multitude of people or if thousands of Facebook friends don’t “like” their charity cause, then it’s just not worth doing! Oh my, yogis, that just isn’t so! All of us – the J.K. Rowlings of the world AND the Rose Sabins of the world — have the same opportunity to make an impact in someone’s life. The key is to take action without attachment to the outcome.

Mother Teresa said it best; “Never worry about the numbers. Help one person at a time.” She didn’t care about impacting popular culture or racking up big dollars for a charity. She cared about helping a person, each person, whether it was a homeless man living in a garbage dump or a dozen hungry, orphaned children. She saw the needs of the millions of impoverished, desperate people in Calcutta in the mid-1900s and quickly translated her higher purpose into concrete action.

For me, Mother Teresa is the poster woman for Karma; she originated the principle of Just Do It. She didn’t worry about what people thought of her. She didn’t worry whether she helped one person or 100. She didn’t care if others looked down on her for helping the uneducated or those with leprosy. She just helped. She had no money, but she had a higher purpose, rested in a higher power, and realized that despair and hopelessness are fed by inaction. Just do it.

Yes, lovelies, the world is a fucked up place; those of you who come to my class have heard me say it many times. Yet you can better your corner of the world by shining your light into dark and frightening places and living your Karmic purpose.

Start small. Leave a $20 tip when a visibly exhausted woman serves you a $5 breakfast. Tuck a few McDonald’s gift cards in your purse for those begging for food. Find something complimentary to say to the cashier at Marc’s. Leave your quarter in the Aldi grocery cart for the next person. And smile. At everyone. All the time.

The world needs your Divine light. There is no exercise or yoga practice better for the heart than reaching down and lifting people up! Helping others can be a cure, not just for those who are in need, but for your own soul as well.

Don’t overthink this, friends. Just do it; do it with an open heart and no expectations. And perhaps someone you help will help someone else…true Karma.
Rising by lifting others is what true yoga is all about.