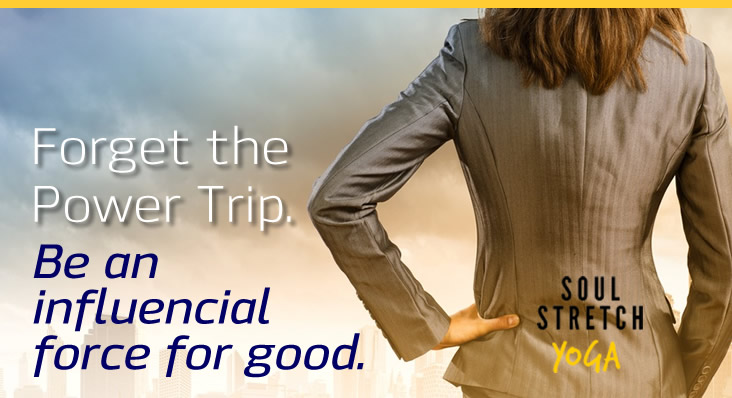 So, lovelies. I didn’t always have a closet full of yoga tights and tanks, nor did I have a clue what a mantra is, let alone a mudra. Hard to imagine, isn’t it?

Instead, picture this: Me, dressed in spiky heels, a killer business sheath, sporting a cha-cha leather briefcase, headed to a quarterly meeting to propose an advertising campaign for a local car dealership designed to drive sales into seven figures.

In my life-before-yoga, I spent 20+ years running my own boutique advertising agency. I billed in the millions every year, and did TV/radio, print and billboard ads across five states. My ads were fun, creative and I prided myself on being able to influence the spending habits of thousands and thousands of consumers.

My agency had the power to “move the needle” for clients, as we said in the business. Increased sales. Name recognition. Expanding production that meant more jobs and a boost to the local economy. Those kinds of traceable numbers paid my salary, and I was proud of my success.

Most of my agency clients also were big-hearted. They spent some of their growing profits to benefit Cleveland charities, and so did I. Those kinds of contributions made me proud that our agency could influence giving-back to the community. Yoga Rose was emerging.

Power. Influence. Two big words that have are both able to effect change, but in such different ways.

Lately, there’s been a lot of talk about the word “influencer” in our new age world of social media. Facebook and Instagram define an “influencer” as someone who has established credibility and expertise in a field who can persuade others to live a certain lifestyle by virtue of their authenticity and reach.

One of the many possibilities of yoga is that it shows us the path to be as authentic as possible and to be bold and strong enough to show other people that authentic self. Yoga opens the real, deep part of us and helps us leave behind the polished public persona we have developed to impress others, to make them envy the cool-ass drama of our so-called lives because we intrinsically feel we are lacking. Yoga inspires us to seek a greater good, not a “highlight reel” of expensive trips or a houseful of stuff.

Modern day influencers want us to believe that they are inspiring us to be our best self and live our best life. But in truth, it’s a power trip, and a lucrative one. They’re “showing off” for their own good – not for the greater good of others.

In yoga, there is a difference between power and influence. True influencers seek to uncover the greatness in each individual, inspire authentic change, without any personal gain.

I love how our blast designer, Tina Ingraham, described the difference between power and influence to her teenage daughters.

“There are two ways to approach change,” she said. “One is with power, the other is with influence. People often use their “power” for their own good.  But using your “influence” is truly for the good of others without thinking how it affects you.”

There is a practice in yoga called Asteya, which means non-stealing, not in a physical sense but in an inner sense. It’s a nuanced concept, but in its most simple description, it means having faith you can create what you need to fulfill yourself. The moment we feel a lack in ourselves, we “steal” from others. What they have, we want, and so we start looking outside ourselves to fill the void. But when we attend to our own growth and interests, we engage in the joyful challenge of building our own selves. And from the fullness of self, we experience completeness and begin serving the world (non-stealing) rather than have the world serve us (stealing).

I’m willing to bet you know people on a power trip, who feast on their control over others. People driven by power lead by intimidation and fear rather than by earned respect. Greed and arrogance motive them, and they feel no responsibility to set a positive example. They assume power is their right, their privilege. They do it their way. Power Rose was a little too close to this lifestyle model for comfort.

And you probably know people who are true influencers. Compassion and encouragement serve as their vision, and they lead by serving as a mentor, not a dictator. Influencers do the opposite of power-trippers. The best influencers encourage people to take risks but also to accept failures and still find the courage to get back on the horse again with renewed knowledge and optimism. Because after all, true courage doesn’t always ROAR, lovelies.  Sometimes, courage is a quiet voice at the end of a long day, that says, “I will try again tomorrow.” This is the model Yoga Rose aspires to!

As yogis in a modern social media driven society where we can post just about anything at any time, how are we going to use our “influence” to better the lives of others? How can we practice Asteya so we fulfill ourselves with greater good, not greater “goods.”

An unknown author said, “You will never influence the world by trying to be like it.”

Forget the power trip, yogis. Practice being a force of good for others; help them experience their own greatness by sharing your knowledge, inspiration and vision.  You have nothing to lose and so much to gain.