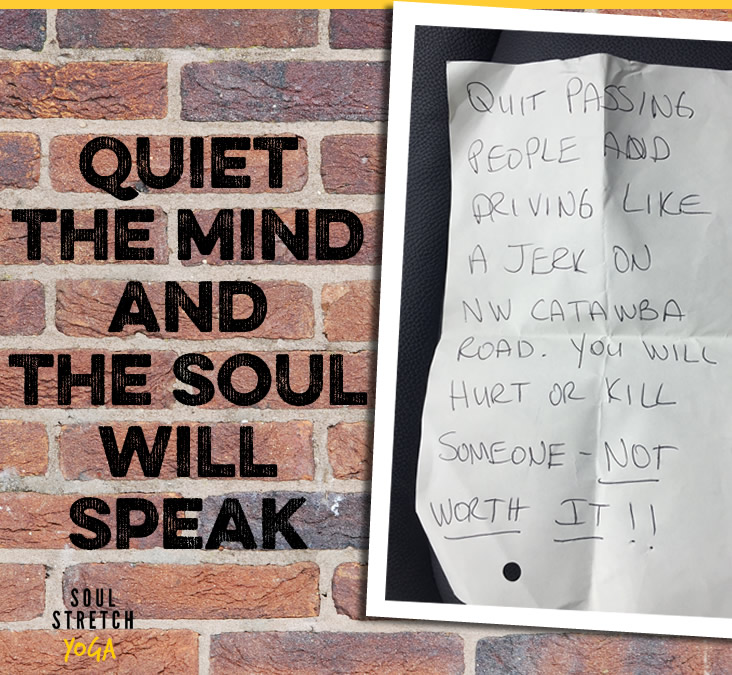 Quiet the Mind and the Soul will Speak

Yoga can re-shape a person inside … and out! Sometimes it takes years of practice to experience the transformation, sometimes people feel it begin after just a few times on the mat. Sometimes it requires serious study, and other times a word or song or experience can open the gates. For me as a teacher, there is little more gratifying than observing students as the power of yoga takes hold of their “insides.”

A few weeks ago at a Candlelight Slow Flow and Gong meditation class in Catawba (with the Heckler, aka my husband), a dear friend of ours attended the class. He’d come to the GLOWGA event in September, and enjoyed it so much he decided to come to a studio class. That happens to a lot of people. They visit a class, feel the stirrings of change, and come back. This particular evening Nikki, the instructor, told a story about a guy driving his brand new just-off-the-lot Maserati home, taking the turns in the residential neighborhood a little too fast, hitting the gas a little too hard. He had his hand out the window, loving the feel of the smooth dark green paint, when WHAM. Something hit the side of his car. He jumped out, saw a brick in the road, and a kid standing between two cars. The man grabbed the boy by the shoulder and said, “What the heck? That’s a new car you threw that brick at, and an expensive one at that. It’s going to cost a bunch of money to fix it.”

The boy grabbed his hand. “I’m sorry, I needed to make someone stop, everyone was going so fast.” He pointed behind the row of parked cars. “My brother’s wheelchair tipped over and I can’t get him up. His head is bleeding and I need help.”

The man swallowed whatever harsh words he was about to say and let the boy lead him to the wheelchair. He hoisted the wheelchair off the child, set it upright, and using his handkerchief, wiped the blood off the child’s face after lifting him into the chair. He wanted to help the boy push his brother home, but the boy refused. “I’m sorry about your car, but thank you for helping. God bless you.”

The man watched until the boy pushed the wheelchair around the corner. Slowly he walked back to the Maserati , the words God bless you looping through his thoughts. He looked at the dent in the car and smiled. He never did get it fixed. He said he wanted to always remember that God whispers in our souls and speaks to our hearts, and if we don’t take time to listen, sometimes he throws a brick at us. It’s up to us whether we listen.

That story got me. The boy, the man, God whispering. It touched my heart, lovelies. I listen better on my mat; it’s when I open myself and am vulnerable. It’s when I cry and release, heal and let go. That night it seemed the telling of that story was meant for me. I was in a rush-around-like-crazy cycle and the gong meditation, along with the story Nikki shared, spoke to me about quieting down, being in harmony.

Maybe the story was a whisper from the Divine to me, but if so, the Divine wasn’t finished speaking.

After the class, we were having some cider and fall-type treats when the fellow who is friends with Doug and me (the one who came to his first studio class after GLOWGA) asked us all to wait a moment. He ran out to his car and came back with a note with a hand-written message that he’d found on his windshield earlier that day: Quit passing people like a jerk on NW Catawba Rd. You will hurt or kill someone — not worth it!!

I don’t believe in accidents or coincidence. Things happen because we need them to happen. Maybe we need a lesson, or a friend, or a prayer … and a God moment happens. It was no coincidence our friend came to class THAT night, or that Nikki chose to tell the Brick story THAT class or that he had gotten the note THAT day. God was whispering to his soul and heart, and until the yoga class, he hadn’t listened. But he got another chance; an unsuspecting yoga teacher, one he’d never met, delivered the same powerful message as the note and this time, maybe because of the power of yoga, he heard it.

I admired our friend that evening. He didn’t have to tell us about the note. He didn’t have to admit that he had been driving like a crazy man that morning, speeding up to the bumpers of people ahead of him and cutting people off. He recognized he had been in a hurry, concerned with himself and no one else. It was pretty brave of him to be so open and honest in front of so many people he didn’t know. The note was his brick but he didn’t listen, so the Divine sent Nikki. Believe me, we all got the message that night: Let go of the resistance to the harmonic flow of life, God may whispering to you.

You know, I think it’s not so much the words a yoga instructor says, but how a student receives them. Sort of like when you finally quit smoking. All the warnings about cancer and secondhand smoke mean nothing until you are ready to HEAR them.

We get tangled in so much anger, confusion and self-absorption sometimes that it’s hard to open ourselves to anything else but chaos and noise. We need a brick! And sometimes it takes the powerful quiet of our yoga mats for us to be able to hear what’s put forth and be ready to receive it. Quiet the mind and the soul will speak.

Erich Schiffmann, author of Moving Into Stillness, says yoga is a way of moving into stillness in order to experience the truth of who you are.

In your practice, lovelies, seek to find stillness. Let the whispers come. Let your soul speak. Let the power of yoga shape you. Whatever you do, don’t wait for a brick!