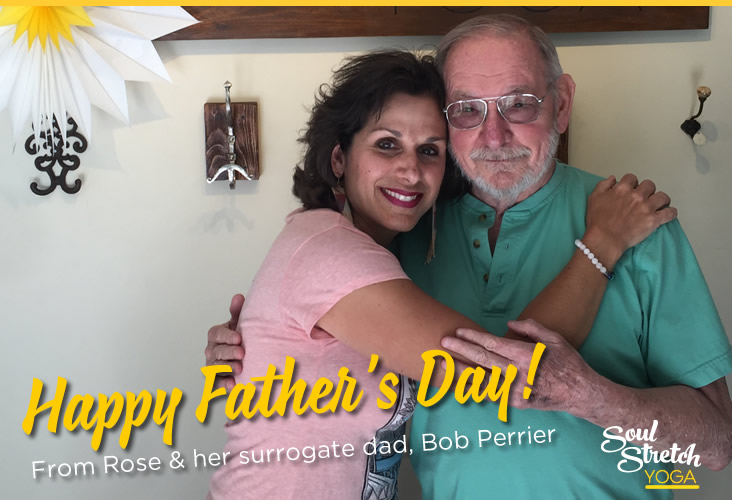 The Sacred Title of Father

Not all of us have the kind of dad featured on an American Greetings card. The dad who takes his kids to get ice cream, laughs at their silly jokes, swoops them up if they fall. Some dads can’t … or even won’t … provide a protected and loving place for their children.

That was the case in my family. I left home when I was 18, not because I was moving on to the excitement of college, but because I was escaping an unhappy, often hurtful, home.

It’s not that my parents were deliberately cruel or abusive; they were products of their brutal experiences in war-torn Italy. They were born in the same Sicilian village, but my dad was older and it wasn’t until years later, in America, that they met.

My dad fought for the Royal Italian Army in WWII. When allies Hitler and Mussolini turned the tables and became enemies, the Nazis executed the Italian Prime Minister. Then they rounded up all the Italian soldiers, killing those who were Jewish and throwing the rest into prisoner of war camps. My dad fell into the second category. Whatever good cheer and youthful hopes he had were lost in the brutality of those camps.

In 1944, when my mom was 18, Nazis invaded her village, and their occupation was cruel. Mom’s family took whatever they could carry and fled into the mountains where they hid deep in the forest. It was a hard life of constant vigilance that went on until Allied Forces freed their village. The fear and anxiety my mother experienced during the occupation and while in hiding never left her.

My dad was already in the United States when my mother came to America in the 1950s on a 6-month visa. Her brother was already here and had a good job. There was no way my mom wanted to go back to the impoverished and dreary life in Sicily, so shortly after arriving in Cleveland, it was arranged for her to meet my father, a bachelor. The only thing they had in common was the village of their birth. My dad was rigidly traditional in his views about the roles of men/women, husbands/wives. He was controlling, dark and moody, and was alternately angry or withdrawn. His mercurial personality did nothing to calm my mother’s fears or lessen her anxiety, yet she managed to remain a selfless, giving and loving woman.

They both brought wartime baggage with them to their arranged marriage, including terrifying flashbacks. It wasn’t talked about in our household. Ever. It remained unresolved, eating away at them. I suspect that what they experienced is what we call PTSD (post- traumatic stress disorder) today. Although they, like many other war survivors, lived through evil and inhumane times, it is their children who are the true casualties of their war. We suffered the consequences and were haunted by the ghosts of our parents' tumultuous pasts.

Pat Conroy’s book, Beach Music, exemplifies this experience for me. One of the characters, Shyla, is the daughter of Holocaust survivors consumed by the guilt of having lived while so many others died. They pressed their burdens onto Shyla’s shoulders, fed her their pain. She eventually committed suicide.

Instead of leaping off a bridge, I left home as soon as I could. My childish efforts to make our home happy were for naught. My parents were broken and they remained broken until they died. It saddens me that the terrors they experienced kept them from enjoying life, and in my dad’s case, from loving his family.

My mom and I were close, but my dad was a different story. He wasn’t capable of giving me the love and guidance and encouragement I craved. He did give me life, and for that, I am grateful. Our relationship was cold and hard and distant when I lived at home, and it never changed. My yearning for a dad never changed, either.

Over the years, God has brought me a handful of exceptional male role models, and from them, I have seen how extraordinary the emotional support of a father can be.

Most extraordinary of all of those role models is Bob Perrier. He is my husband’s sponsor in AA, and for the past 15 years, he has given me the love and guidance and unqualified support of a dad. He is the kind of dad I wanted as a child.

Bob has been my sounding board for my businesses, listening to my crazy ideas and gently guiding me to wise decisions. He’s been the shoulder I’ve leaned on during personal challenges in my family or marriage. Most recently his warrior spirit as a 3-time cancer survivor kept me from some of the dark corners of my own cancer journey.

He is a remarkable man, who lives life with gusto! At 80+, he does yoga or Pilates five times a week. He goes to lunch almost every day with friends. He sponsors nine men in AA, including my Doug. And there is his cherished family, always a priority. His wife Kay. His five children (plus me!) His six grandchildren.

His word is his honor, and not only does he talk the talk, he walks the walk. He is an admirable man, and he is there for those he loves. Always.

Singer, songwriter and yogi activist, India Arie’s song “I am Light” is a reminder that I am so much more than my family’s crooked history.  She sings, "I am not the things my family did. I am not the voices in my head. I am not the pieces of the brokenness inside... I am light." Yogis believe that everything happens for a reason, and everything works out. I am the Divine Light today not in spite of my childhood but because of it.


And because of Bob. Not only has Bob shepherded Doug through sobriety, he has made a protected and loving space for me as my “surrogate” dad. Sometimes those who we call family aren’t our biological relatives. Sometimes we get to choose who we nurture and who nurtures us.