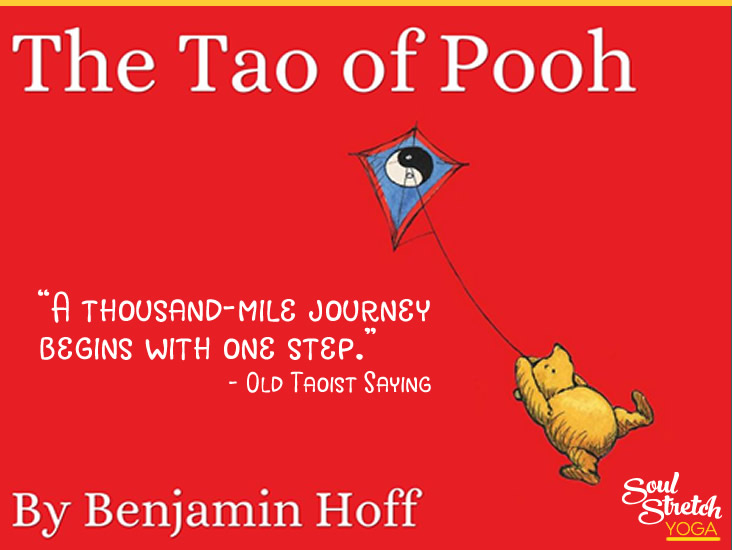 The Wisdom of the Uncarved Block

When I was child, I loved Winnie the Pooh and The House at Pooh Corner. Such happy and delightful books about lovable Pooh and his playful pals. It never occurred to me that Pooh and his adventures were anything more than entertaining stories.

A few weeks ago a student in Soul Stretch’s yoga teacher training gave me a book called The Tao of Pooh by Benjamin Hoff. I don’t know about you, but Tao and Pooh are two words that don’t seem to go together. But they do.

The Tao of Pooh is ingenuis, an allegorical tale using A. A. Milne’s characters as clues to the wisdom of Tao. You remember Eeyore, and Piglet, and Christopher Robin, and of course, Pooh, the placid bear who just “is.” Taoism is all about simplicity, selflessness and flowing with life while being true to one’s inner nature. Sounds a bit like yoga, doesn’t it?

Hoff affectionately refers to Pooh as "the Uncarved Block." Described in the classic Taoist manner, the essence of the Uncarved Block is that things, in their natural simplicity, contain their own natural powers to problem solve. In other words, the "wisdom" is found in the forest and the trees, not learned from scholarly books. Tao ideology applies this principle not just to things in nature (animals, birds, etc.), but to human beings, too. Much like Taoism, yogis trust things to unfold as they should, not as we want to make them.

Some of us are Tiggers, unfettered and free; some of us are worry-wort Eeyores; some of us are Owls, pompous in our knowledge; some of us are restless Rabbits, calculating the odds; some of us are Piglets, unsure and hesitating; and, some of us are Poohs, calm and still and often the character who saves the day. Pooh trusts the universe and lives a simple life, in harmony with nature. He doesn’t try to outsmart the universe and control the outcome of his problems or decisions. Sometimes Pooh seems too simple-minded, even slow-witted. Hoff tells us that Pooh isn’t stupid or naive. He is an Uncarved Block, comfortable in his skin, reflective, and calm. He doesn’t overthink things, relying instead on his intuition, his common sense. And because he “just is,” time after time, trial after trial, it is Pooh who leads his friends in the Hundred Acre Wood out of trouble. He keeps it simple. He leans on faith and flow instead of fear and control.

Yogis can learn a lot from Pooh. We, too, can stop overthinking things and listen to our own inner voices. It takes practice to hear that inner voice, to recognize it and trust it during challenging times. Yoga teaches us to calm our minds, still our “will,” and reflect before we act or react. And like Pooh, to “just be.”

I am married to an Uncarved Block, a good thing as I am a high energy former-overachiever. Before I came to yoga, it was my husband, Doug, a man who's been through many challenges in life, who taught me how to roll with the punches. He's called himself “simple-minded" for decades and relied on his gut … just what Hoff preaches in The Tao of Pooh.

Sobriety brought Doug to “simple-minded thinking” over 30 years ago. In Alcoholics Anonymous, he learned to trust his inner nature and his higher power. Things may not always work out the way he wants them to, but they work out. He tells me all the time that we can’t control what’s happening, but we can control our own actions. And when we practice acceptance, we live life with no resentments, much less fear and mostly free of worry and stress.

Towards the end of Tao of Pooh, Hoff writes that as children, we are helpless but aware of things, and enjoy what is around us. As adolescents, we are still helpless but oh, do we want to appear independent and in control! As adults, we overthink things, applying facts and knowledge and our too-active brains.

But in Taoism, according to Hoff, there is another, higher stage of development, known as “the independent, clear-minded, all-seeing Child. It is the level known as wisdom.”

The ancient Tao texts encourage us to, "Return to the beginning; to become a child again, filled with light and happiness." Pooh often did this by returning to the Enchanted Place at the top of the forest in the Hundred Acre Wood, where he sat quietly and observed. I return often to my “beginning” by practicing Happy Baby or Child's Pose on my yoga mat. Where is your beginning? It's not far away, you know, and it's not hard to find because this enchanted place dwells within you. All you have to do is travel inside your heart to release your inner child and restore your Uncarved Block.