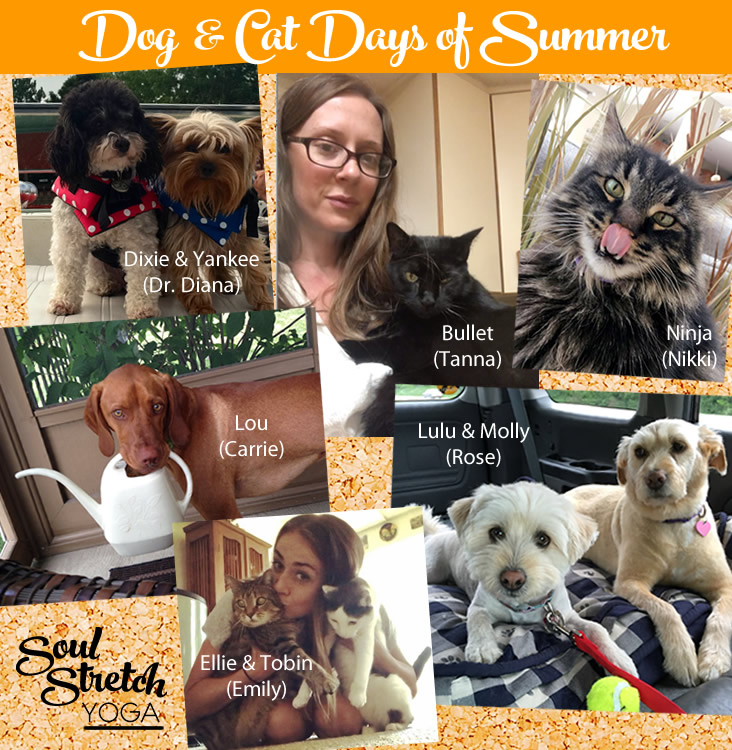 Welcome to the Dog & Cat Days of Summer

The Dog Days of Summer. Hot, sweaty, sultry days that stretch from mid-July to late August. Days so hot that even my boisterous pup, Lulu, seeks shade. Yet the Dog Days owe their name not to the heat or our canine friends, but to the stars.

Thousands of years ago, the Greeks and Egyptians noticed that when the sun was its hottest, the major star in the constellation Canis Major rose and set with the sun. They named the star Sirius after the Greek word for scorcher, and over time it became known as the Dog Star, and the period it was at its brightest, the Dog Days.

Ancient astronomers named the clusters of stars we know as constellations after familiar shapes, such as gods or animals. Many of them were inspired by mythological giants and creatures of legend, a combination of spiritual powers and animal qualities, but there were everyday animals among the stars, too. Turtles, rabbits, dogs, eagles, fish.

Ancient yogis also found inspiration in animals when seeking enlightenment for the body and mind. But unlike the astronomers, who sought familiar shapes in the celestial heavens to map the night sky, yogis used the physical attributes and movements of animals for the names of poses. They didn’t believe there was a “lower” animal kingdom ruled by a “higher” kingdom of humans, but rather that all living creatures existed as equals. By assuming animal shapes in yoga, some believe we are endowed with the animal’s spiritual power. Others believe it strengthens the connection we all … man and animals … have with the earth and to each other.

While it seems awkward sometimes to tangle our bodies into the shape of a cat or cow or crane, yoga brings us to an awareness that Mother Nature is our best teacher, and one of our strongest connections to the Divine Light.

But once I came to the practice of yoga, I started paying attention to how animals moved and expressed themselves. It’s so instinctual, so natural and God-aligned. By assuming yoga poses and movements, I developed a connection with Mother Nature, breaking away from my “human” spirit to connect with all aspects of my soul and the natural world. A kind of spiritual “shape-shifting” that brings balance to our lives.

How do you feel when practicing a Down Dog pose? It’s a playful pose, one that reminds us that dogs, by instinct, are active, social, energetic beings. A couple Down Dogs after a busy day reminds me that like my pups Lulu and Molly, I need to make room for fun and curiosity in my spirit.

Conversely, our feline gurus teach us how to relax. After a nap on a sunny chair, a cat will arch its spine up, and then down, savoring the joy of a long, soft stretch. A good Cat/Cow stretch brings us a reminder to relax, to savor, to stretch.

Research has shown that dogs and cats can help calm anxiety levels and panic attacks in military veterans and that therapy trained horses are doing wonders for kids suffering from autism. There are dogs that can detect pending seizures and dogs with such an incredible sense of smell that they can sniff out some cancers.

In my adult life I’ve shared my home with many cats and dogs, and realize now that like a good yoga class, they have had the power to heal me. They have been my companions when I’ve been lonely, and seem to know when I needed a “cuddle.” Just looking into Molly’s eyes can calm me. When I was undergoing cancer treatments, Molly and Lulu intuitively knew I needed warmth and soothing after my cancer chairs. They snugged up against me, one on each side, and their warmth and love infused me with calm. I’d doze off, warm and protected, and the three of us would sleep all afternoon.

Like people, pets have their own personalities. Aloof and kingly. Playful and happy. Protective or yippy. They all have an immense capacity of love and gentleness. Like us, they feel pain and anger and hurt and fear…and intense joy. Whether it’s a puppy jumping into your arms or the disdainful flip of a cat’s tail, they express their emotions. They have heart. They have soul. They have Divine Light. We could stand to learn from them, not the other way around!

So here we are, lovelies, in the final Dog Days of Summer. Hail the Downward Facing Dog! This king of all poses targets your upper and lower body all at one time, so you’ll feel it in your hands, arms, shoulders, back, calves, hamstrings and even the arches of your feet! This pose is lovingly named in honor of our four-legged friends because of the way they naturally stretch their entire bodies. Happy pooches are most likely to do a Downward Facing Dog stretch because it is often accompanied by yawns, tail wagging and anticipated playtime! Happy humans do it because it provides balance for the mind and body. WOOF and Namaste from Rose, Molly & Lulu!